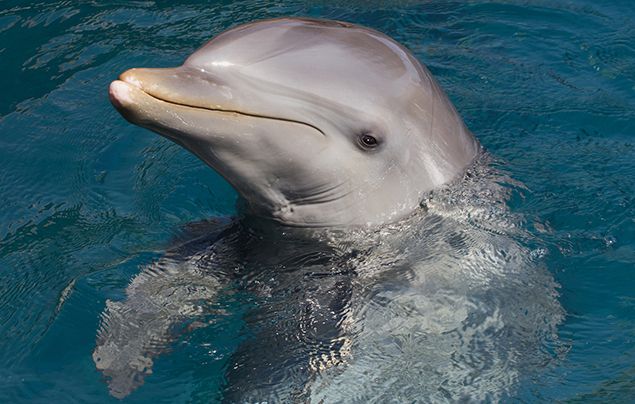 1) Bottlenose dolphins are marine mammals that live in tropical and temperate oceans (oceans with mild temperatures) around the world. This includes the waters off the UK and Ireland, where you can spot them swimming and playing in bays and river estuaries!

2) These beautiful creatures have a short thick beak (as their name suggests!) and a curved mouth, giving the appearance that they are always smiling. They are usually grey in colour, and measure around two to four metres in length.

3) Social creatures, bottlenose dolphins travel in groups, called “pods“, of around 10-15. In these groups they play and hunt together, as well as cooperate to raise young dolphin calves and help each other.

4) Bottlenose dolphins are super swimmers, gliding through the water using their curved dorsal fin on their back, a powerful tail and pointed flippers. They can reach speeds over 30km an hour and dive as deep as 250m below the surface! 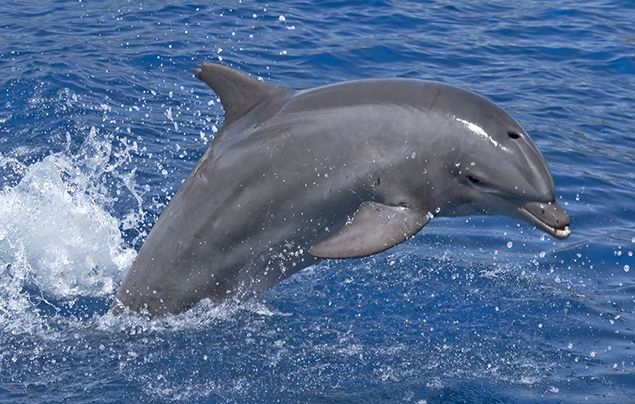 5) These cool creatures are awesome acrobats, too, and can be seen flipping (or “breaching“) out of the water. In fact, they can launch themselves up to five meters out of the water before crashing back down with a splash! There are different theories as to why they do this – it could be to get a better view of things in the distance, clean parasites off their bodies, communicate with other pods or just for good fun!

6) Although they live underwater, the bottlenose dolphin must come up to the surface to breath air. It breathes through what”s called a “blowhole“, a hole at the top of its head. These clever creatures can open this hole when inhaling and exhaling out of the water, and close it when below the ocean surface. They can hold their breath underwater for around seven minutes.

7) Bottlenose dolphins are kings of communication! They send each other messages in different ways – they squeak and whistle and also use body language, leaping out of the water, snapping their jaws and even butting heads! 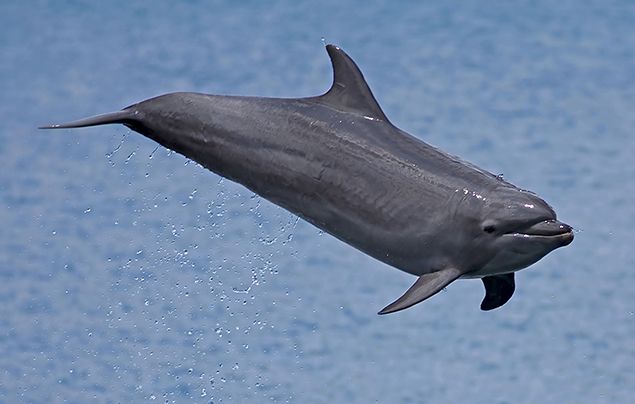 8) These magnificent mammals also produce high-pitched clicks to help them navigate and find food – a process called “echolocation“. When the clicking sounds hit an object in the water – such as a rock or fish – they bounce back to the dolphin as echoes. From this, the super swimmers can work out the location, size and shape of the object. Cool, eh?

9) Carnivores, our finned friends eat mostly fish, but will also eat crustaceans such as shrimp and squid, too.

10) Thankfully, bottlenose dolphins are not classed as endangered. However, illegal hunting, fishing nets and pollution pose threats to these incredible creatures.

Love reading about sea life? Then be sure to check out our Humpback whale facts!