All people should be treated equally, right? Regardless of where you come from, what religion you follow, where you work, what language you speak or whether you’re a boy or a girl. Well, sadly, this isn’t always the case, and many groups of people around the world still suffer as a result of prejudices and discrimination.

Thankfully, there are some amazing people who have done incredible things to fight for equality. One such person was a civil rights activist called Rosa Parks.

Who was Rosa Parks?

Rosa was born in the town of Tuskegee in Alabama, a state in southern USA. Her mother was a teacher and her father a carpenter, and she had a little brother called Sylvester. After her parents separated when she was just a little girl, Rosa and Sylvester moved with their mother to Alabama’s capital city, Montgomery. 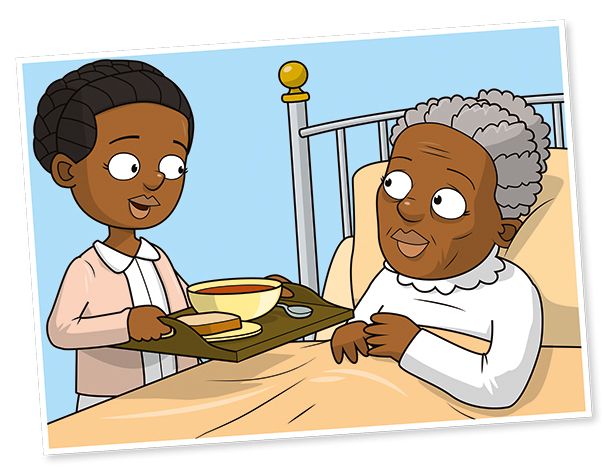 Rosa loved to learn and studied hard at high school. But, sadly, she had to leave school at 16 to care for her dying grandmother and, shortly after, her very sick mother. When she was 19 years old, Rosa married a barber called Raymond Parks, who encouraged her to return to high school to earn her diploma (an education certificate). And that’s just what she did, before beginning work as a seamstress in Montgomery.

Life for African Americans like Rosa was hard. At the time, the Southern United States operated under the ‘Jim Crow laws’ – a set of laws introduced in the late 19th century that claimed to give African Americans “separate but equal” status and treatment. But, in truth, there was no ‘equality’ whatsoever.

Created by white authorities who thought black people’s lives didn’t matter as much as theirs, these laws enforced racial segregation and allowed for discrimination against African Americans – referred to at that time as “colored” people.

The Jim Crow laws were introduced in different ways from state to state, but there was one common goal – to make sure black citizens and white citizens led very separate lives.

Among other things, they had separate schools, churches, libraries, restaurants, toilets, drinking fountains and waiting rooms. In some areas, there were laws banning black people from sports events and even forbidding them to work in the same office as a white person.

African Americans had far fewer rights, too. Racist laws known as ‘Black Codes’ restricted them to low-paying jobs and made it incredibly difficult for them to vote. These laws also meant black people could be arrested for small things.

What did Rosa Parks do? 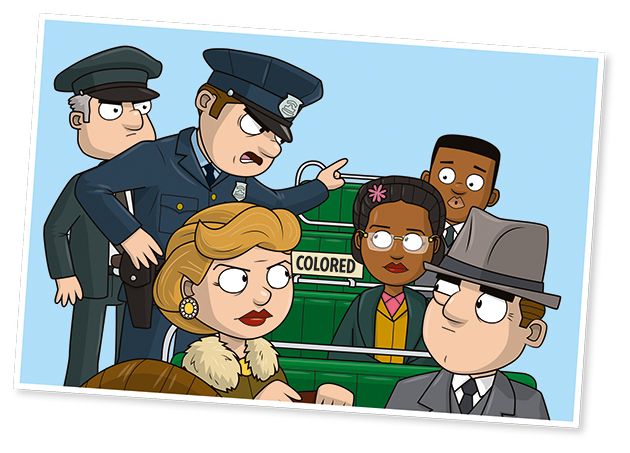 In the face of such racism, Rosa decided to make a stand for what was right. Together with her husband Raymond, she joined the National Association for the Advancement of Coloured People (NAACP), working towards putting an end to discrimination and segregation.

But it was on the 1 December 1955 that Rosa truly sparked change. After a long day at work, Rosa boarded the bus home and took a seat. At that time in Montgomery, seats at the front of buses were reserved for white passengers, and the seats at the back for black passengers. 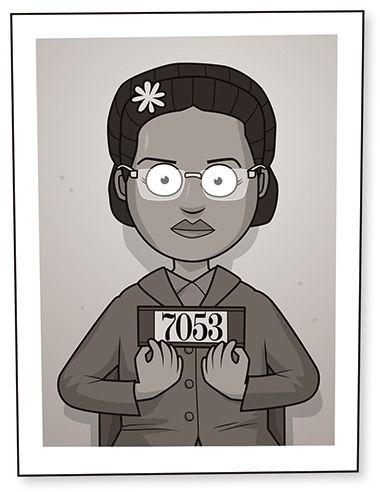 The bus quickly filled up and when a white man boarded, the driver told the African American passengers to give up their seats for him. Whilst the other black passengers obeyed, Rosa did not. The result? Rosa was arrested by the police and fined for breaking segregation laws! But Rosa refused to pay, and argued that it was the law that was wrong, not her behaviour.

On news of Rosa’s arrest, the black citizens of Montgomery came together and agreed to boycott the city’s buses in protest. This meant that from 5 December 1955 (the date of Rosa’s trial), African Americans refused to travel on buses. The boycott was managed by an organisation called the Montgomery Improvement Association, for which Dr Martin Luther King Jr was elected as leader.

The protest proved super effective, with more black people participating than had been expected.  And since African Americans made up around 70% of bus users, the city’s transport services made far less money and began to struggle. But it wasn’t an easy protest for the black citizens. Many of them didn’t own cars, and so they had to carpool together or walk long distances to get where they needed to go. What’s more, the boycott was received with anger by members of the white population, who responded with aggressive and dangerous acts of violence.

Nevertheless, the protesters stuck together and fought for their cause – and on 13 November 1956 their efforts were finally rewarded. After 381 days of boycotting the buses, the Supreme Court ruled that Alabama’s racial segregation laws were ‘unconstitutional’ – meaning they weren’t valid and should not be recognised. In light of such a wonderful victory, Rosa became known as “the mother of the civil rights movement”.

Sadly, despite the victory, life wasn’t easy for Rosa and her fellow activists after the boycott. Faced with continued violence and threats by angry white groups, Rosa and Raymond moved to Detroit (a city in the northern US state of Michigan), to live with Rosa’s brother.

There she continued to promote civil rights and help those suffering from discrimination and injustice. She continued to support the NAACP and many civil rights events, and in 1987 she co-founded the Rosa and Raymond Parks Institute for Self Development to provide career training for young people in Detroit. 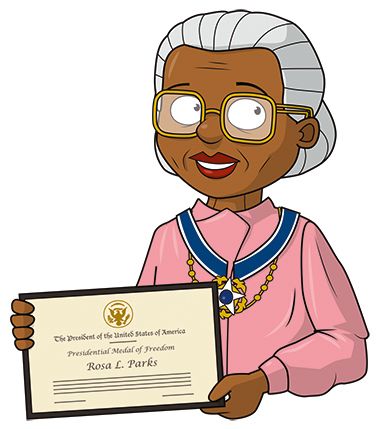 Rosa received numerous awards for her strength, courage and her incredible work for civil rights – including the Presidential Medal of Freedom in 1996 and the Congressional Gold Medal in 1999.

When did Rosa Parks die?

Rosa died of natural causes on 24 October 2005 at the age of 92. But she continues to be recognised all over the world as a symbol of freedom and equality. Today, commemorative statues stand (or ‘sit’ we should say!) in her honour, to remind us of her remarkable achievements that should never be forgotten.

What do you think of our Rosa Parks facts? Leave a comment below and let us know!