Here at National Geographic Kids, we”re fascinated by our planet”s wild cats! Join us we discover ten facts about the Eurasian lynx… 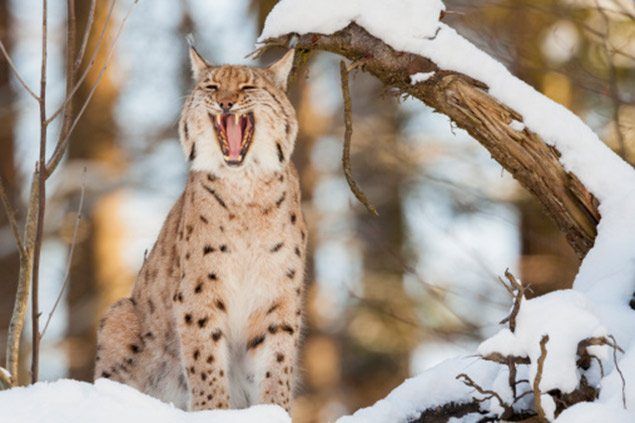 1) The Eurasian lynx is one of the widest ranging cats in the world and can be found in the forests of western Europe, Russia and central Asia.

2) These fur-ocious felines are the largest of the lynx species, and the third largest predator in Europe after the brown bear and the wolf.

3) These incredible cats are strict carnivores, feeding mostly on ungulates (hoofed mammals) such as deer. When food is scarce they also eat smaller prey like hares, foxes and rabbits.

4) The Eurasian lynx can be considered quite a secretive creature. The sounds it makes are very low and often not heard, and their presence in an area can go unnoticed for years!

5) Come meal time, the Eurasian lynx stalks its prey from the cover of thick vegetation. It then pounces on its unsuspecting lunch, delivering a fatal bite to the neck or snout.

6) The Eurasian lynx”s distinctive features are its black tufts at the tips of its ears and a long white facial “ruff”. It has grey, rusty or red fur which grows thicker in winter. Its coat is also patterned, almost always with dark spots.

7) Although they may hunt during the day (particularly when food is scarce), the Eurasian lynx is mainly nocturnal or crepuscular (active during dawn and dusk). They spend the day sleeping in dense vegetation. Zzzzzzzz.

10) In Europe, the Eurasian lynx was once on the brink of extinction, with numbers falling to around 700 between 1930 and 1950. The good news is that conservation work has allowed populations to bounce – or pounce! – back, with numbers increasing 10-fold over the past 50 years. Yey! Work still needs to be done though, gang, as illegal hunting and habitat loss still pose a threat to these beautiful cats.